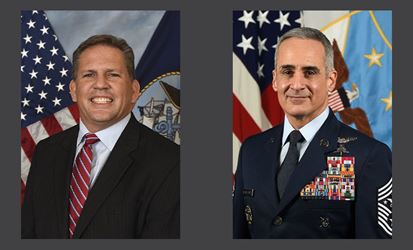 James “Hondo” Geurts and Ramón Colón-López are the 2020 recipients of the highest honors of the Special Operations and Low Intensity Conflict (SO/LIC) Division of the National Defense Industrial Association.

Geurts, who is assistant secretary of the Navy for research, development and acquisition, will receive the R. Lynn Rylander Award. This award is named for a Defense Department civilian and a founder of the SO/LIC Division, who was an advocate and activist for Special Operations Forces.

Colón-López, who is senior enlisted adviser to the chairman of the Joint Chiefs of Staff, will receive the DeProspero Lifetime Achievement Award. This award is named for retired Army Col. Albert DeProspero, who served in Special Forces and is a founding member of the SO/LIC Division, as well as supporter and advocate of the Special Operations community.

“The Special Operations Forces community includes extraordinary people, making this decision a challenge every year,” said Dana Hudson, SO/LIC Division chair. “Geurts and Cólón-López have distinguished themselves among a very special group of people. We thank them for their extraordinary contributions in their service to the warfighter, Special Operations Forces and the greater defense communities.”

These annual awards recognize each person’s distinct contributions of lasting impact in Special Operations, low-intensity conflict and irregular warfare. These honors will be presented at the awards presentation during 2020 Virtual SO/LIC on October 2.

In his current role, Geurts oversees an annual budget of more than $100 billion and is responsible for equipping and supporting the Navy and Marine Corps. He has more than 30 years of joint acquisition experience and has served in all levels of leadership positions, including acquisition executive, program executive officer and program manager of major defense acquisition programs. Following a distinguished Air Force career, Geurts was the acquisition executive for Special Operations Command at MacDill Air Force Base, Florida.

In his current role, Colón-López is the nation’s highest ranking noncommissioned officer and the principal military adviser to the chairman on all matters of joint and combined total force integration, utilization, health of the force and joint development for enlisted personnel. He is an Air Force pararescueman with nearly 30 years of service in positions in Europe and the Pacific, as well as Air Combat Command and Joint Special Operations Command.