DOD Releases Guidance on Non-Programs of Record for Industry

NDIA and the Aerospace Industries Association (AIA) have collaborated extensively with DOD on how to simplify the acquisition and sales process of NPORs, ensuring consistency with the Administration's updated Conventional Arms Transfer (CAT) policy. Together, the industry associations and DOD created the USG Community of Interest (COI), comprised of representatives from select DOD offices (e.g., USD(A&S) and DSCA), various implementing agencies (IAs), and other interagency entities. "The formation of the COI represents a significant step forward in facilitating a centralized, formal process for NPOR proposals," noted an August 3, 2020, DSCA letter. The COI's work culminated with the release of the July 2020 "Non-Program of Record U.S. Industry Handbook" that outlines the acquisition, FMS, and DCS procedures for NPORs.  Moreover, it provides points of contact for contractors and finally sets up a classification framework for NPORs.

Because the current acquisition framework is POR-centric, NPORs have received scant attention. The Handbook observed that the deferral of an organized NPOR framework has led to a weak proposal processing system and affects assessments of exportability and releasability. Without a centralized system, unclear guidelines troubled the DCS and FMS of NPORs. Consequently, this led to the introduction of NPOR-related offices within the IAs. Fortunately, the Handbook facilitates NPOR coordination with industry and simplifies contractors' business operations. 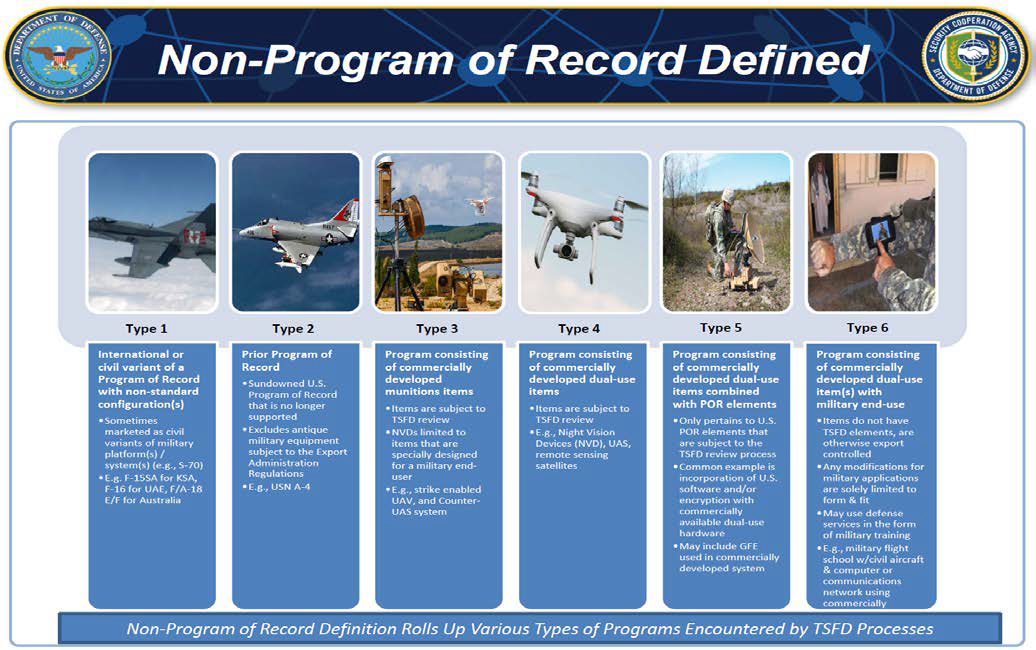 The Handbook now defines NPORs based on class types (Types 1-6). Previously, anything that was not a Program of Record was assumed to be an NPOR line item. Without a classification system, trying to sell an NPOR item would be challenging since it would have to go through an improvised submission process to ensure that the product was consistent with existing FMS or DCS regulations. The figure above breaks down the classification scheme. Essentially, Types 1-2 involve items that are international variants of a current POR or were a prior POR. Types 3-4 include commercial capabilities that would typically have a military end-user but can be dual-use items – like Type 4 items. Lastly, Types 5-6 involve emerging technologies that may have POR elements and is adaptable for military end-use. Some examples include U.S. software and encryption capabilities, commercial GFE, military training modules/programs, and communications/computer networks.

The COI plays a critical role in the proposal process (see pages 7-9). They possess the power to approve or reconsider a submission. However, they are not export adjudicators. The Handbook states, "[a] favorable evaluation indicates support within DoD for further consideration." The process is five phases beginning with an initiation process wherein a country or contractor issues a request via letters of request or DCS applications. Or, an informal demand signal is initiated whereby the COI pre-coordinates with industry on a potential export and logs it into the COI database. Next, the last 4 phases deal with acquiring sponsorships from IAs, assessing the strategic relevance of an NPOR, and the viability evaluations of a proposal followed by a final approval decision. Occasionally, an NPOR may not have an immediate IA sponsorship. In this case, the COI executive secretary (DSCA) will coordinate with the COI to find potential IAs to sponsor the NPOR proposal. The executive secretary also has the authority to assign a sponsor directly.

Viability assessments cover a wide range of factors, including cost realism, capability contributions, relevance, sustainment factors, and the potential contribution to the end-user. If a proposal is denied, the COI can reconsider the case through a Course of Action, led by the COI Executive Board – or the COI voting members - to decide on the final verdict. All reconsiderations must be signed off by a "submitter's responsible export-related official who is familiar with both the initial submission and why it was 'Not Supported' by the COI."

The Handbook concludes with points of contact for industry and how to communicate through classified and unclassified channels.  The appendices include an industry submission template and a reconsideration template. The Handbook is the beginning step to improve the NPOR acquisition process and opens more opportunities for the industry to provide comments on the proposed system. The COI also strives to quickly manage applications with an estimated maximum of 45 days for end-to-end processing. As this moves forward, NPORs will become easier to handle on the administrative side and will bolster the military capabilities of the U.S. and its allies.