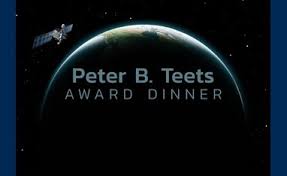 ARLINGTON, VA – The vice commander of Air Force Space Command and the man behind the Pegasus air-launched rocket are the recipients of the 2018 Honorable Peter B. Teets Award, the National Defense Industrial Association announced Thursday, June 28.

In April, Thompson took the seat as vice commander of the Air Force Space Command, which oversees mission-ready space and cyberspace forces and supports North American Aerospace Defense Command, U.S. Strategic Command and the other combatant commands. Before this, he was vice commander and special assistant to the commander of space command’s operations at Peterson Air Force Base, Colo. Other previous assignments include U.S. Strategic Command at Offutt Air Force Base, Neb. Commissioned in 1985 at the U.S. Air Force Academy, Thompson is a career space officer with assignments in operations, acquisition, research and development and academia.

In 1987, Elias conceived and led the design of Pegasus, the world’s first privately funded space launcher and the first space launch vehicle to be dropped from an airplane. Its maiden launch from a B-52 aircraft occurred April 5, 1990. In the decades since its maiden flight, Pegasus has conducted 43 missions, launching 94 satellites.

Thompson and Elias will receive their awards during a dinner in their honor, Tuesday, July 31, at the Westfields Marriott Washington Dulles in Chantilly, VA. To register for the Teets awards dinner, go to www.ndia.org/events. Media are welcome to cover the awards dinner.

The dinner is in conjunction with the National Security Space Policy and Architecture Symposium, Wed., Aug. 1, at Perspecta in Chantilly. The symposium is a classified event and closed to press.